photos above: Graham Fudger, Nick Cowell, Hock Khoe, Dee Conway
​
read about shows further below ... and check out these interviews:
Read about Peta Lily's long career in this Total Theatre interview.
Inspirations and insights about Lily's work in Sorcha Ra's 50 over 50 interview.
Scroll below for highlights from the show archive.
Peta Lily Company on YouTube here
Parker Dee on YouTube here 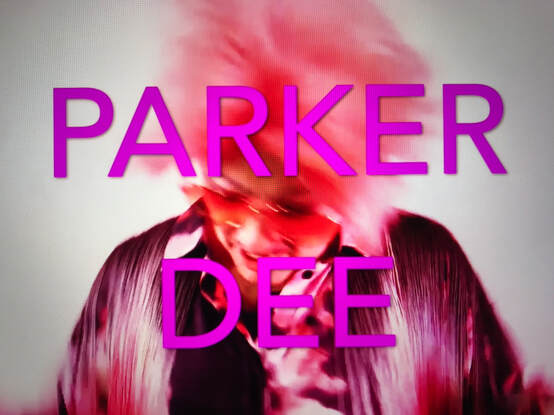 Parker Dee is a unique entity and a force of nature. He has so much to say on so many subjects. He is directed by Peta Lily and Timothy Michael Dodd. Parker is a King among men (a Drag King). He records songs and free-association stand-up - all rolling out on his YouTube
channel - so he's also King of Content, you're welcome!

Actual people actually said these actual things:
‘Literally genius – very, very  funny’, ‘Sexy and funny’, ‘I LOVE Parker’, ‘Parker Dee is the man!’, ‘I am totally blown away by him. An incredible creation.’, ‘Very stupid, strange and clever.’, ‘Parker dares to go where no other cis man can.’, ﻿‘A tiny baroque opera of micro-managed self-sympathy, expecting praise just for realising he hasn’t earned it.’, ‘Illuminating - allowed me to re-think some of my own '59 year old white male' assumptions.’, 'The YouTube clips are brilliant! Funny, creepy and funky-danceable! I love when Satire is fun.', 'This is frikkin hilarious!' 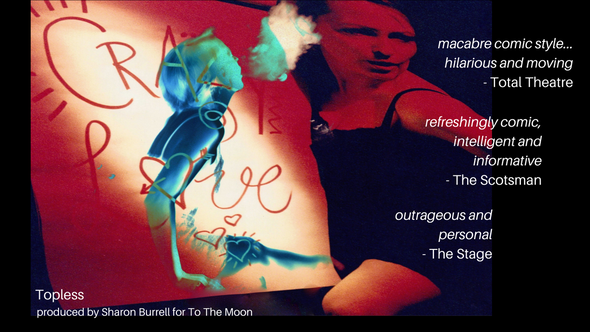 Totally in awe of @peta_lily #topless! I'm lost for words. Go see her and be transformed by her story #fangirl - @LucyAveryWrites

Went to see @petalily "Topless" in Hackney last night, on marriage break-up, a younger lover, breast cancer, a parent's death, all served up with panache, flair and a tantalisingly wicked wit! A masterclass in physical #comedy, #comic timing, the female voice and emotional honesty. -‏ @Lucylovescircus on Instagram

Courageous honesty and big subjects discussed with a light, sharp touch. Crackling rhythmic verse and Lily's intimate performing presence plunges audiences in to an all-waving, all-drowning look at inner and outer life where the mundane is revealed to contain the mythic. Dionysian worship rubs shoulders with a Hymn to Blasphemy and Charles Bukowski meets Japanese outsider art. Dive in!

​Check it out yourself on the Youtube Channel.
​
LucyLovesCircus blog review from the 2016 run at Lion & Unicorn click here
photo: Jake Mc Lellan, graphics, Jamie Zubairi

Lily talks about how she gave up performing and went on a journey that was simultaneously spiritual and commercial. Cathartic and positive. Directed by Di Sherlock. Produced in 2014 by Giant Olive Theatre Company, originally produced by the ladida group run by Jimmy Jewell.

This is a touching, funny, informative and very warming show. Remote Goat

Stand-up theatre - about 'choices and chakras, courage and cowardice, flesh and blood and bellies.' UK and Hong Kong. Directed by Jen Heyes.

Calling Peta Lily’s act stand-up comedy is like describing the Bank of China Building as an office block or Miles Davis a trumpeter … Lily’s polished performance is Fringe theatre at its best. South China Morning Post

For those uninitiated in the world of theatre, Peta Lily is just about the sexiest solo performer about. This ‘crackpot glamourpuss’ mixes comedy, confession, song and sassiness in a truly compelling performance … never fails to entertain. Make sure you catch her next time she is in town. Live Magazine
photo: Graham Fudger, Graphics Jamie Zubairi

Stand-up theatre - about 'life and death and love and hate and sex and sticking plaster and breasts.' UK, Greece, Australia.

a macabre comic style...her accounts of failed relationships, low self-esteem, and her brush with breast cancer...are both hilarious in their frankness and moving. ..with her consistently high energy and warm, engaging stage presence, Peta Lily captures and maintains the attention of her audience throughout. Total Theatre

a talented comic, she takes the departure of her husband and the illness and death of her mother and turns them into something which is not just entertaining, but is even funny  Edinburgh Evening News

a refreshingly comic, intelligent and informative exploration of the turbulent events in one woman's life crisis...consistently funny...Lily recounts her experiences with an incisive and inventive wit...guiding her audience away from unnecessary sentiment but not losing a sense of poignancy The Scotsman

instead of erotica, Lily gives her audience something far more outrageous and personal ... told with consistent humour. Lily has lightness of touch, instinctive wit ... one of those rubber faces ... and a silky singing voice. Lily manages ... to keep them laughing right up to the end. The Stage

One of the main forces of the Physical Theatre movement in Britain, Lily toured as a soloist with many Arts Council funded productions: Red Heart 1983, Whole Parts 1984, Frightened of Nothing 1987, Wendy Darling 1988 (FRINGE FIRST, Edinburgh Festival), Hiroshima Mon Amour 1991. Always breaking new ground, Lily writes and performs original works combining her talents as actor with elements of dance, Commedia, mime and world theatre, while always seeking to entertain her audiences.

(Hiroshima Mon Amour is) about the end of the world and the power of kitsch...extremely funny Time Out

wistful, enchanting and wonderful  The Scotsman

Bold, gutsy and a brave new adventure in style The Stage

something of a crackpot glamourpuss: she makes up her own rules Time Out

Beg! - a two-handed physical theatre thriller, drawing on the influences of Cocteau, Cronenberg and Almadovar, a lurid piece about a female psycho-killer, haunted by the tale of Red-Riding Hood. Arts Council funded.

Electric ... raunchy ... manic energy ... funny where it hurts ... the kind of entertainment that gives physical theatre a good name The Guardian

Photo: Douglas Robertson
Wendy Darling - solo show.
'Wendy Darling' revisits J.M. Barrie's haunting 'Peter Pan' from the point of view of a grown-up Wendy, returning to her childhood nursery. The real-life inspirations for the boys all died in the great war. Wendy Darling looks at the beauty and the violence of Neverland, loss, death and tells a tale of impossible love.
Premiered at Theatre Workshop in Edinburgh winning a Fringe First that year and later performed in Netherlands and up and down the UK including Winchester Gantry, Salisbury Arts Centre and the ICA London. Created by Peta Lily andRex Doyle. Character-relevant Choreography by Kate Dalton. Lighting Design by Samantha Lee. Soundtrack by Nick Dwyer.
Subtly sexy, legitimately violent and ultimately haunting Time Out
wistful, enchanting and wonderful  The Scotsman
‘Mime, dance, music and the spoken word fuse to produce a vivid  … sometimes frightening picture … totally enthralling … well-conceived, well-directed, and brilliantly performed’ Salisbury Journal
Coming soon to the YouTube Channel