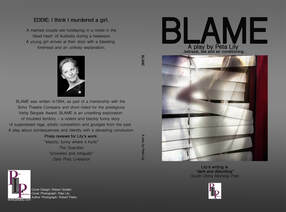 BLAME - cast of three
It’s 1995. Tim and his wife Eddie are holidaying in Central Australia, a hot and desolate place made even more inhospitable by extreme temperatures. Tim has severe repetitive strain injury and is meant to be resting – not writing a rock musical about Bluebeard. Eddie doggedly cares for him while swallowing her feelings about her stalling career. Then a mysterious girl arrives, disoriented and bleeding from her forehead. Blame is about creative jealousy and a relationship thrown on the Devil’s anvil – wry, disconcerting and ultimately devastating. Blame was shortlisted for the Verity Bargate Award. 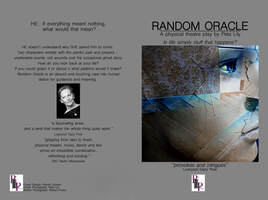 ​RANDOM ORACLE - cast of two
Old wounds, unalterable events and the occasional ghost story. How often do you look back at your life? If you could graph it, or dance it - what would it look like? 'Random Oracle' is absurd and touching - it takes an oblique look at the human desire for guidance and meaning. Two humans wrestle with painful threads of past and present. A haunting physical theatre text mixing fact with fiction to look at the way we seek meaning and guidance in our lives - absurd and touching. 'Random Oracle' was commissioned by The Unity Theatre, Liverpool as part of their Three Women Festival in 2001 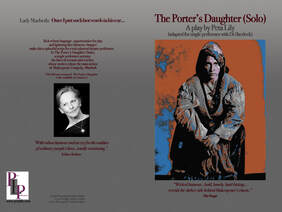 ​THE PORTER'S DAUGHTER: Solo - cast of one
A gift of a script for a solo theatre performer or actor -full of opportunities for play, lighting-fast character changes, bold humour and pathos. Written in rich, robust language, the script bristles with vital characters and compelling scene action. A single performer plays a host of parts; portraying the fates of servants and witches whose stories eclipse the main action of Shakespeare’s tragedy 'Macbeth'. The eponymous Porter's daughter provides a strong and unsettling central role driving through the story arc and revealing the dark underbelly of the traditional tale. 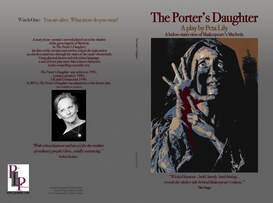 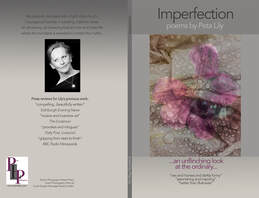 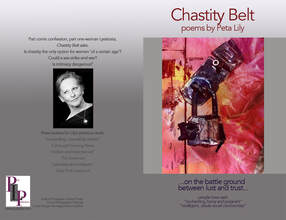 CHASTITY BELT: on the battleground between lust and trust
Part comic confession, part Lysistrata remix, Lily asks impossible questions: Is intimacy dangerous? Do Hags have more fun? Funny, provoking and always accessible, these poems take you on a journey where the goddess Diana is resurrected, where Goddesses Durga and Kali battle a Buffalo-demon, whizzing past the Rakes of the 18th Century and into the dark and dirty corners of the 21st. 'A potted history of Hinduism my ma would approve of. Playful asking of questions through comedy.' - Anil Kumar, Actor Enchanting, funny and poignant. 'Edgy, charismatic, witty and thought provoking.' - Linda Marlowe.
Audiences for the stage show said: 'intelligent, provocative and very funny’, ‘a dangerously wicked emotional truth’, ‘creative, original, and raunchy (in a very chaste way!)’ 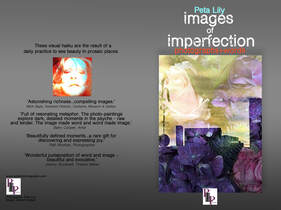